Home » How to Take Off a Door Handle

How to Take Off a Door Handle 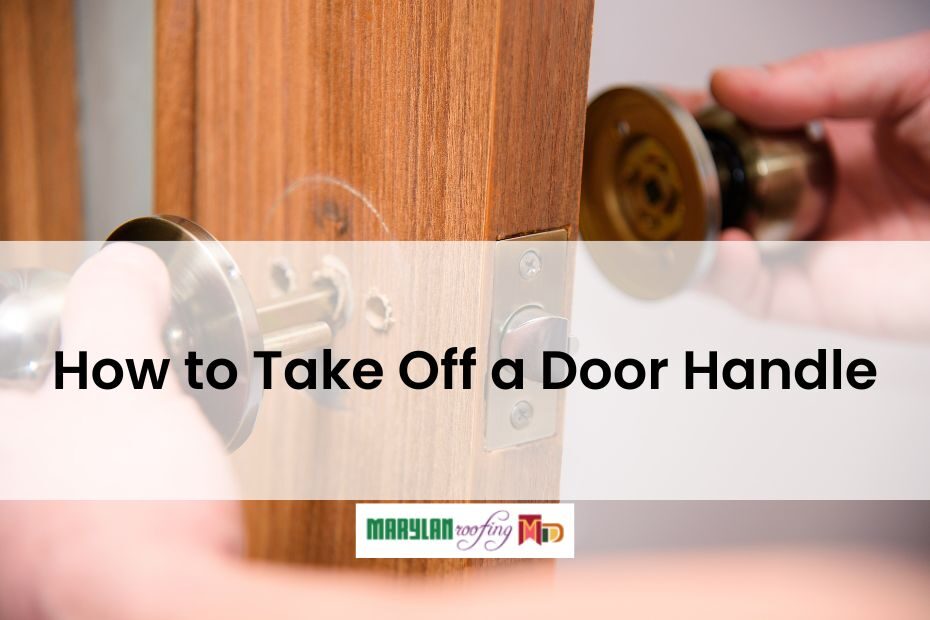 Have you had enough of that broken knob for good? Are you prepared to improve the way things look? Most homeowners can take off a door knob in under an hour with just a few simple tools. Our easy-to-follow instructions include both types of door knobs, those with and without exposed screws.

How To Remove Your Door Knob if You Can See Screws

In a few easy steps and with only two tools, you can take off any door knob that has screws on the outside. However, if time is of the essence, a drill or electric screwdriver might be used as an accessory.

Your first step should be to remove the screws from the inside of the door knob. The cylinder of the majority of knobs is held in place by two screws. However, there are models with as few as one and as many as three. Carefully unscrew the last screw so the doorknob doesn’t come off the door.

With the screws removed, the knob may be taken apart easily. Pull the knobs apart by grasping one in each hand. It shouldn’t be that difficult to take them apart. The external side knob, however, can become jammed on the latch. As you pull the knob out of the door, turn it back and forth several times. In most cases, simply twisting it free from the clasp will do the trick.

Take Out the Latch

How To Remove a Door Knob That Doesn’t Have Screws

Screws that are not visible from the exterior of your doorknob are quite OK. Even if it’s stubborn, you can still get rid of it, albeit it could take more effort. Covering screw heads inside the knob is a decorative plate with an athletic theme.

Find the tiny screw hole in the door knob’s cylinder if there are none visible. You can press the release pin inside the hole using a small screwdriver or a paper clip. Use one hand to press in the pin and remove the door knob with the other. Try pressing the knob in before pulling, or twisting while you pull, if it doesn’t come off easily.

Pop Off the Cover Plate

As a further step, remove the protective cover. The rose is the ornamental plate that conceals the door’s screws and other inner workings. To remove the plate from the door knob, locate the release tab and pry it off using a flathead screwdriver.

Take off the cover plate to have access to the doorknob screws on the mounting plate. Typically, a pair of screws is required to secure a mounting assembly, however other variants may use less or more. If you don’t want the door knob to fall out of the door, remove the screws carefully.

Separate the doorknob’s components. Pull the external knob out of the door while holding the mounting plate in one hand. If the knob is stuck, you can liberate it by loosening the latch assembly with a quarter turn of the knob.

When you’re done, take out the strike plate from the door frame. It can be removed from the door by undoing the screws and sliding it to the side. It should come out easily, but if it doesn’t, you can use a screwdriver to pry it loose.

How To Check if Your Doorknob Has Visible Screws

There are two methods for taking off a door knob, depending on whether or not there are screws that can be seen. You can change the doorknob even if you can’t find the screws right away. It is usually easy to tell what kind of knob you have with with a cursory inspection.

Your first order of business is to locate the door’s internal knob. This is typically seen behind the door leading to the room. This is always the backwards place to put the key in a lock. Then you should inspect the rose for any screws. A doorknob’s rose is the plate that conceals the connection to the door.

Look for a tiny hole in the cylinder that connects the doorknob to the rose if there are none visible in the rose itself. The cylinder, which is also known as a tumbler, is what the door knob is fitted with. For doorknob designs without screws, the release is located in the hole.

By leaving the door open, you can quickly and easily check for both. Get down on the floor and prop the door open with your legs. In most cases, this is the most convenient alternative to bending over or getting on your knees when adjusting a door knob.

Although screw-in door knobs are still widely available, the demand for screw-less designs has grown steadily over the past few decades. To add a touch of sophistication to an interior door, many homeowners opt for knobs that conceal their mounting screws.

No comments to show.