Home » What is the Roof Capacity for Snow?

What is the Roof Capacity for Snow? 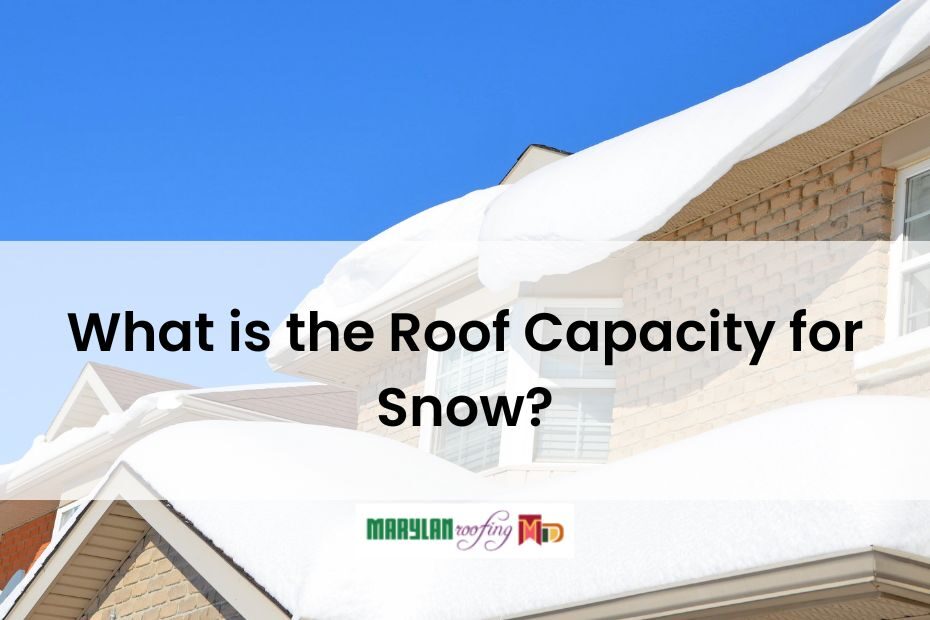 Once you get over the initial excitement of seeing snow for the first time, you’ll realize just how much havoc the white fluffy stuff can wreak on your home. Too much snow can cause structural damage to your roof, which can be both dangerous and expensive. Fortunately, most well-maintained residential roofs can support a significant amount of snow (around 20 pounds per cubic foot) before ice dams form. However, the amount of snow your roof can hold is contingent on several factors, including its shape and material.

Factors Affecting How Much Snow a Roof Can Hold

While a rule of thumb of 20 pounds per cubic foot of snow is useful, the exact amount of snow that your roof can safely hold depends on several factors.

What Kind of Roof Do You Have?

Snow is more easily shed from steeply pitched, angular roofs than from flat roofs because of the force of gravity. Since snow can easily accumulate on a flat roof, those with one should be more vigilant about keeping it clear than those with a steeper roof pitch.

Shingles on your roof.

Damaged shingles on a roof can’t safely support heavy snowfall. That’s why it’s important to check your roof for damaged shingles before the first snowfall in your area and to replace them if necessary. Asphalt shingles are typically less expensive than slate shingles, but both are strong, durable options that can hold snow well.

When measured in cubic feet, the density of various snow varieties varies. For instance, snow density affects how much snow in a given volume weighs.

What Are the 4 Indicators That There Is Already Too Much Snow on Your Roof?

Following a heavy snowstorm or ice storm, you may be concerned about whether or not your roof can handle the weight.

It may begin to sag when snow accumulates too much on your roof. This is sometimes visible on the ceiling or rafters of a house, both from the inside and the outside.

Spots in the Wall or Ceiling That Just Appeared

Look for new holes in the wall, particularly around the door frames, and have them fixed if necessary. Snow on the roof might create structural concerns and even hazardous frame problems if you see new cracks or have difficulty closing doors that generally close easily.

After a heavy snowstorm, if you notice any new leaks inside your house, it may be a sign that the weight of the snow on your roof is putting it in danger of collapse. So, following heavy snowfalls, it’s a good idea to check the ceiling of your house.

Houses, particularly older ones, are sometimes expected to generate sounds like creaking and popping. Yet, if you hear a lot of new sounds during or after a snowstorm, it may be because your home is struggling to cope with the added weight.

Five Easy Steps to Take When Clearing Snow From Your Roof?

Do not risk your life by climbing onto your roof to clear snow, particularly if the ground is slick after recent precipitation. You should only shovel snow off the ground if doing so would prevent the roof from collapsing or being damaged. Hiring a professional snow removal service is the safest option, but if you must do it yourself, here are some things to keep in mind.

Rake with a Telescoping Handle

One-story homeowners may buy a telescopic rake that extends to the roof and allows them to safely remove snow without risking injury. In most hardware shops, you can get one for about $15 and $30.

Clear the Roof’s Edges of Snow and Icicles.

Your roof’s temperature drops toward the eaves and overhangs but rises toward the middle. Due to the melting snow and ice, ice dams form at the roof’s edge and hinder snow from draining down the roof.
The icicles and snow near the roof’s edge may sometimes be removed using a shovel, and the roof may begin to shed snow on its own. However, it would help if you still used care since icicles and falling snow also pose a threat in this area.

Snow removal from a roof should only be attempted with assistance. You should always consider hiring a professional, but working with a friend is highly recommended if you find yourself in a bind and must resort to DIY.

Please Don’t Shovel All the Snow Away

Since you’ll be shoveling right up next to your shingles, you risk damaging them if you try to remove all the snow off your roof. As an alternative, strive to remove about half the height of the snow, and use a plastic shovel instead of a metal one to prevent damage to your roof. To completely get rid of an ice dam, it’s best to call in a specialist.

Make Sure Your Roof and Attic Are Safe, Too

Check the attic to ensure no snow is entering your home during a strong storm. The ventilation system on your roof may draw in snow from time to time. While a little coating of snow in the attic is to be expected, finding drifts might cause the drywall ceilings below to collapse.

Calculating the Load of Snow on Your Roof?

Snow has a variety of textures, as you may have experienced when making a snowman or shoveling your driveway. Here are some guidelines to help determine whether the snow on your roof exceeds the typical 20 pounds per cubic foot threshold.

The First Snow of the Season

For new snow to weigh around 20 pounds per cubic foot, it has to accumulate for about 4 feet.

Compared to new snow, old snow that has been packed down about doubles in density and hence in weight. Typically, 20 pounds per cubic foot is the density of snow that is 2 feet deep.

Combination of Fresh and Old Snow

Whether fresh or old, a cubic foot of snow typically weighs roughly 20 pounds.

At What Point Do I Need to Start Shoveling Snow Off My Roof?

If you believe the snow on your roof weighs more than 20 pounds per cubic foot, or if you detect any warning above signals, you should clear the snow from your roof. In any other case, let it melt or fall off on its own.

No comments to show.